​GPX files are compatible with View Ranger and Google Maps 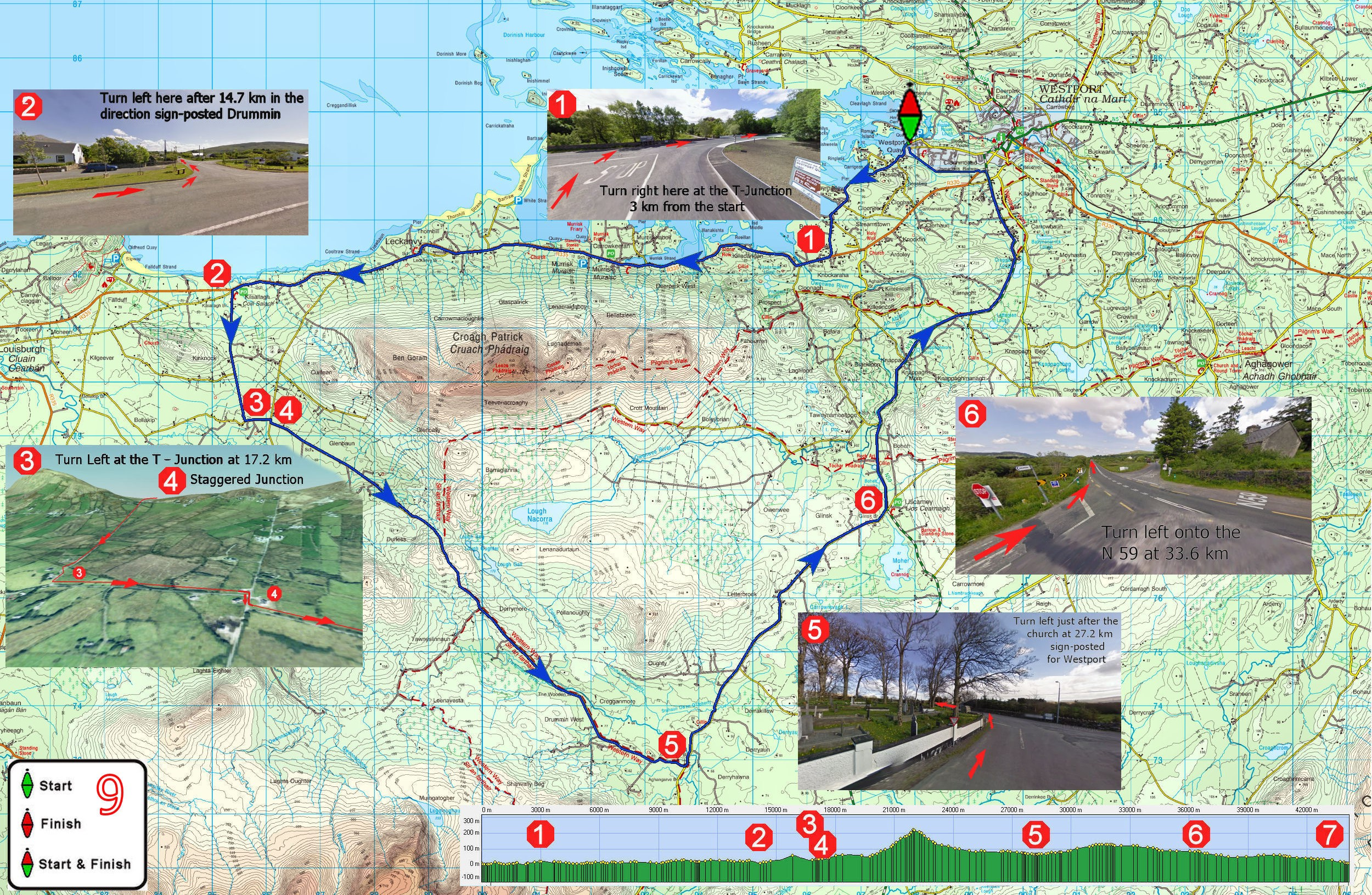 LOCATION: This cycle route starts at the car park adjacent to the Tower’s bar at Westport Quay. The route is located west of Westport and goes through the villages of Murrisk, Lecanvey and Drummin.

LANDSCAPE: This route provides views of Croagh Patrick, Sheefrey Mountains, Achill Island and the Nephin mountain range. The early stages of this cycle route run parallel to the Atlantic Ocean with spectacular views. Later it follows a route south of Croagh Patrick and then a route back into Westport. As a result you find a great variety of landscapes, ranging from seascapes to mountain ranges, to boglands and pastoral scenes.

START/FINISH: At the car park near the Tower’s Bar at the Quay, Westport.

From the Tower’s bar head westwards for 3 km until you come to the main Westport/Louisburgh road (Point 1 on the map).

You continue on this road until you arrive at a junction with a sign for Drummin (Point 2 on the map).

Take the road going left to Drummin and continue on this narrow road for 2.5 km until you come to a cross which has a sign which reads Drummin 11 Km (Point 3 on the map).

Turn left and continue to the next junction. (Point 4 on the map).

Continue on to the church in Drummin. Turn left after the Church (Point 5 on the map) and continue until you arrive at the main Leenane/Westport road (Point 6 on the map).

Turn left and continue on the N59 to Westport. Just before Westport turn on to the R335 and after 150 m cycle on to the Greenway and make your way down to the Tower’s Bar at the Quay.

This website uses cookies to improve your experience while you navigate through the website. Out of these cookies, the cookies that are categorized as necessary are stored on your browser as they are essential for the working of basic functionalities of the website. We also use third-party cookies that help us analyze and understand how you use this website. These cookies will be stored in your browser only with your consent. You also have the option to opt-out of these cookies. But opting out of some of these cookies may have an effect on your browsing experience.
Necessary Always Enabled
Necessary cookies are absolutely essential for the website to function properly. This category only includes cookies that ensures basic functionalities and security features of the website. These cookies do not store any personal information.
Non-necessary
Any cookies that may not be particularly necessary for the website to function and is used specifically to collect user personal data via analytics, ads, other embedded contents are termed as non-necessary cookies. It is mandatory to procure user consent prior to running these cookies on your website.
SAVE & ACCEPT