WESTPORT QUAY, LANKHILL AND BACK TO WESTPORT

WESTPORT QUAY, LANKHILL AND BACK TO WESTPORT 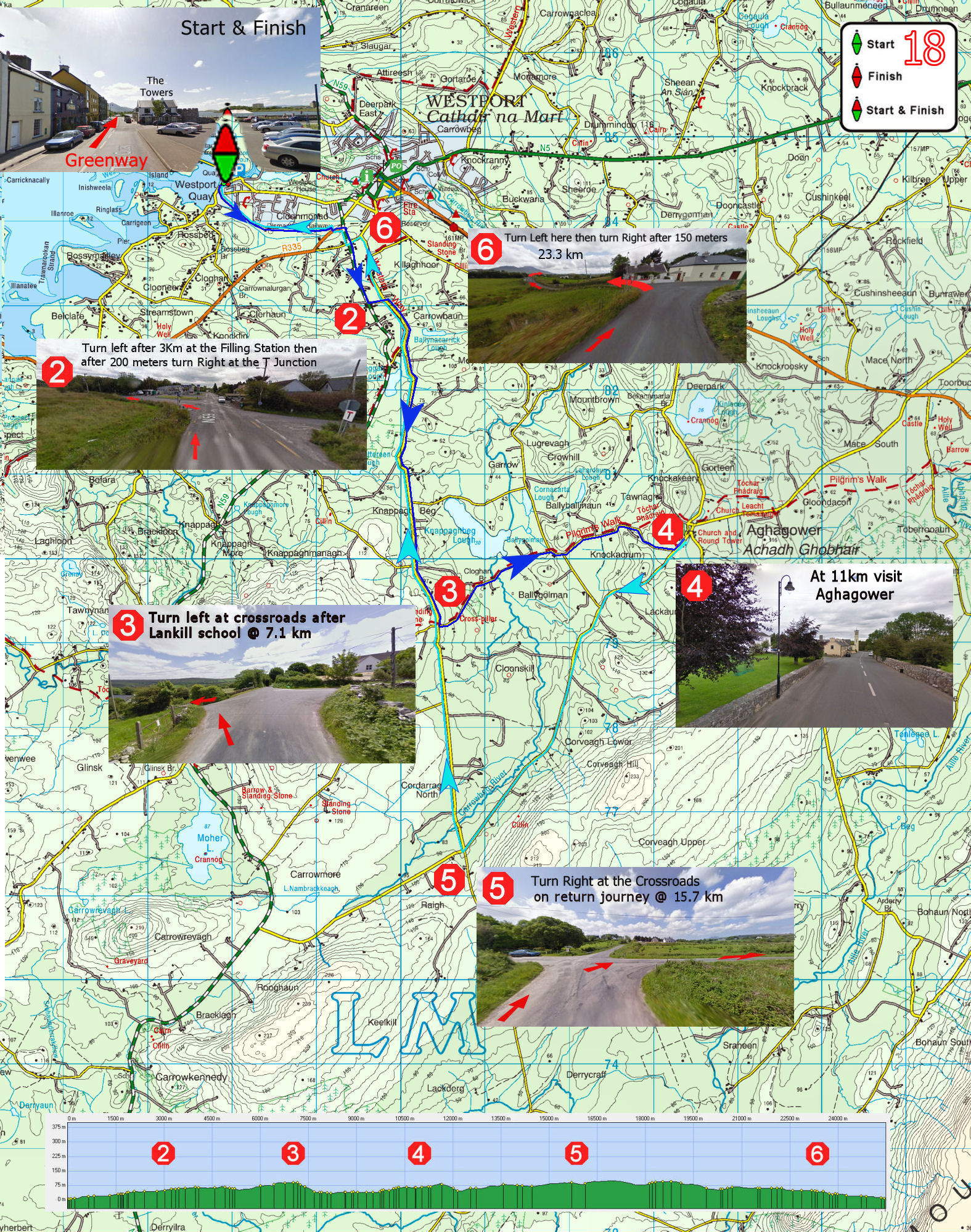 LOCATION: This cycle route passes through areas south east of Westport town (the best place to live in Ireland). This is an area of natural rural tranquillity with rolling hills, lakes, forests and farm animals especially sheep.

LANDSCAPE: This rural countryside has varied landscapes including sheep rearing farmland, boglands, forest clusters, lakes and rivers. On route you will experience background views of the holy mountain Croagh Patrick, the Sheefrey Mountains, the Partry Mountains and to the north the Nephin Mountains.

START/FINISH: At the car park adjacent to the Tower’s Bar, the Quay, Westport.

TERRAIN: The terrain is a mixture of hilly and flat roads.

Continue onto the next cross on the left. Take this road (Point 3 on the map). You are now on Tochar Phadraig (Croagh Patrick Heritage Trail or pilgrim’s path).

That path passes through fields and is in existence for centuries. Continue east to historic Aughagower (“planes of the wells”) (Point 4 on map).

It was a centre of population going back to the Bronze Age. The word is that St Patrick baptised the first converts and erected a church in Aughagower.

Aughagower is said to have been visited by St. Patrick on his way to Croagh Patrick.

Aughagower lies on the pilgrimage way of the Tochar Phadraig – a pilgrimage way from Ballintubber Abbey to Croagh Patrick. The ruin of a medieval church is beside the graveyard. It has a well-preserved 10th century tower.

The tower was built between 973 and 1013. The tower was restored in 1969 and leans slightly to the north. Aughagower has ancient artefacts such as Dabhnach Padraig – a circular bath where pilgrims may have washed their feet. There is a well which has now dried up but it was where pilgrims were said to have drunk water while performing the pilgrimage.

To return to Westport take the road to Point 5 on the map. From there continue to (Point 6 on the map). This bring you past Lankhill School and continue on for about 6 km until you reach the t-junction at Point 6.

This website uses cookies to improve your experience while you navigate through the website. Out of these cookies, the cookies that are categorized as necessary are stored on your browser as they are essential for the working of basic functionalities of the website. We also use third-party cookies that help us analyze and understand how you use this website. These cookies will be stored in your browser only with your consent. You also have the option to opt-out of these cookies. But opting out of some of these cookies may have an effect on your browsing experience.
Necessary Always Enabled
Necessary cookies are absolutely essential for the website to function properly. This category only includes cookies that ensures basic functionalities and security features of the website. These cookies do not store any personal information.
Non-necessary
Any cookies that may not be particularly necessary for the website to function and is used specifically to collect user personal data via analytics, ads, other embedded contents are termed as non-necessary cookies. It is mandatory to procure user consent prior to running these cookies on your website.
SAVE & ACCEPT